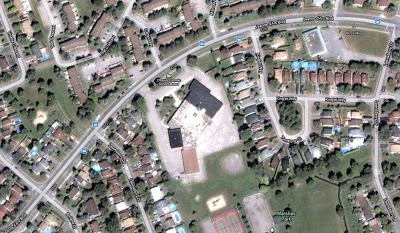 Grade school in Orleans with large circular driveway at the front for dropping off the kids.

I am astounded when I (occasionally) go to Orleans or the western suburbs and see new primary schools with huge driveways/waiting queues just for parents to drop off their kids.

Back when my kid went to St Mary school I was on the PAC. The safety issue of children walking to school came up repeatedly. I thought most concerns totally unreal. I did not realize back then that most of the kids never walked anywhere and had no “common sense” for using sidewalks or crossing the street. The were chauffered everywhere by car. Kids caught the school bus 300′ from the school, waiting a half hour in the freezing cold of winter rather than walking because it was too cold to walk (and these kids had no major intersections to cross). How dumb! (Being car-free our kids had a lot of street sense and sense of direction).
Parents wanted more crossing guards or a policeman in front of the school to stop speeders / dangerous drivers / make the dangerous crossing safer for their precious offspring. So a group of us parents spent two mornings watching cars in front of the school. Something like 75% of the traffic on the street was either teachers driving to the school or parents dropping of their kids. Since there were only 8 classrooms, not many cars were driven by staff.

We watched in astonishment as cars rushed the stop sign, barely slowing down, just to drop off precious at the door. Cars double parked. Cars queued up through the instersection just to drop off junior right at the door, not 40′ up the sidewalk! In short, any danger to kids was caused by the parents themselves.

This finding was not well received. My suggestion that we make the entire block around the school a no-stopping zone / no passenger drop-off zone, so kids would have to walk the last block to school and thus be on quiet, almost car-free streets, was considered lunacy.

Then I found this blog that shows Holland is making the zones around schools into no drop off zones in order to promote child safety and health. I was born 20 years too early, or in the wrong country.