The largest single impediment to a continuous cycling route from the downtown to Westboro (and eventually beyond) is the Bayview Station area.

The OTrain comes through the area from the south; expansion of OTrain or LRT service to Gatineau over the Prince of Wales Bridge must be allowed for. So the cycling route must get across the north-south rail axis.

There are currently two overpasses over the OTrain route. One is Albert Street itself, a four lane road facility with sidewalks on each side. For pedestrians the environment is pretty hostile. On-road cyclists must endure uphill grades and vehicles that speed up because of the “open” environment that encourages faster movement. For cyclists on the Scott Street multipurpose path, it just abandons riders at Bayview intersection. On the east side of Bayview Station, the path on the north side of Albert Street (that should link to the Scott path) just morphs into an asphalt sidewalk then a concrete sidewalk between the bridge and City Centre Avenue, abandoning those who have cycled there from Bronson, enjoying an off-road path.

The other overpass at Bayview is the two-lane transitway facility parallel to Albert Street overpass. 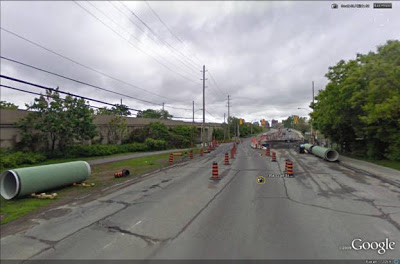 Approaching Bayview from the west while road construction was in process. The transitway is on the raised roadbed to the left. The existing Scott multipurpose path ends abruptly at Bayview Road. In the distance, both the transitway and Albert rise to cross over the Otrain track.

For a cycling route to be attractive to riders and win modal share from the auto, it should be continuous, without major disruptions

Major construction works are envisioned in the Bayview area as part of the LRT construction. How can BikeWest get cyclists across this important transit junction?

In December 2009, Transit Committee instructed staff to “evaluate options for including a bike route overpass over the OTrain cut at Bayview as part of the Bayview Station planning…”

One possibility is to add a 16’-wide addition to the north side of the Albert Street overpass. This would connect the Scott Street portion of the path from the Bayview at-grade intersection over the OTrain corridor to a route continuing along the north side of Albert. Such an addition would also include improved pedestrian sidewalk facilities to handle the much larger walk-in traffic expected at the LRT Bayview Station.

However, there may be a cheaper option. The current transit planning concept for Bayview LRT Station envisions a totally new overpass for the LRT built a few meters north of the current transitway overpass. After the LRT service opens, the existing transitway overpass would be demolished. Rather than spend money destroying bridge infrastructure, it makes sense to carefully examine re-using the facility for BikeWest, as shown in the photoshopped picture below.

The heavy blue line shows the approx. new LRT alignment and bridge and station proposed by DOTT. The suggested BikeWest route uses the surplus transitway bridge, rather than having it demolished. The path rejoins the Scott right of way (to the far left) either by descending to cross Bayview at grade (route option A), or if the Bayview overpass will also be surplus, reusing it to cross over Bayview (route option B). Click photoshop picture to enlarge.

The exact location of the new LRT bridge is not yet known, nor is connection point with the existing transitway alignment on the west. Therefore the cycling route is shown in two conceptual variations, A and B, depending on whether the route can also hop over Bayview Road using the existing transitway overpass. Obviously it would make a better cycling route to avoid an intersection with Bayview Road.

Yet another option for crossing the OTrain corridor would involve relocating the existing transitway bridge. The LRT consultants indicated that the existing structure theoretically* could be moved a short distance onto new piers for about half the cost of building a totally new structure. While the cost of a widened Albert bridge or relocated transitway bridge would be significant, it is the single largest expenditure that would be required to make BikeWest a continuous route from the downtown to Westboro. This might take 1 to 6% of the cycling budget over ten years to fund. Of course, reusing the old transitway bridge would be cheaper, and with the saved cost of not demolishing the bridge, might constitute a transfer of value into the cycling budget.

The current (Feb 2010) updated version of the BikeWest project report can be downloaded from  http://www.ericdarwin.ca/BikeWestReport.doc but it is picture heavy so it may take several minutes to download it.